Posted by Faerthen Felix at 3:13 PM No comments:

Posted by Faerthen Felix at 4:18 PM No comments:

In addition to being a professional mountain guide, Mark Seaton is a published author. Here is an excerpt from his account of the Mont Blanc ascent with Don Planner. You can read the full story here.

At 9am. (local time) on the 25th June 1996 Don Planner became the 1st blind man to climb Mont Blanc via the Gouter Route. The chain of events which lead to my involvement in Don Planner's achievement was a bizarre one.

One day last year Don stepped onto a Zebra crossing only to be hit by a car and sent over the bonnet. In the course of obtaining accident compensation, the conversation with his solicitor turned to Don's intention of climbing Mont Blanc in order to raise much needed funds for the charity St. Dunstans which looks after blinded ex-army servicemen.

Don knew he would need the services of a High Mountain Guide but like many people, he did not know how to go about finding one. At this stage in the conversation the solicitor said "I have a school friend who has just married a Mountain Guide who lives at the foot of Mont Blanc. I will give you his address." This is how I gained my first blind client...

Posted by Faerthen Felix at 11:30 PM No comments:

Email ThisBlogThis!Share to TwitterShare to FacebookShare to Pinterest
Labels: info 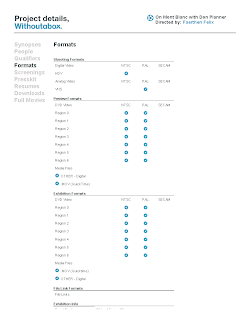 The electronic presskit for this film is available on-line to members of Withoutabox, but you can also download a PDF hard copy of the text here (834K). User: sagehenmisc, password: 1951

Use posts on this blog for production stills and video preview.
Posted by Faerthen Felix at 11:05 PM No comments:

Or, watch on IMDB.
Posted by Faerthen Felix at 9:55 PM No comments: 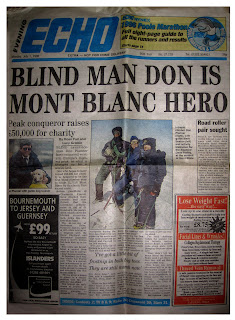 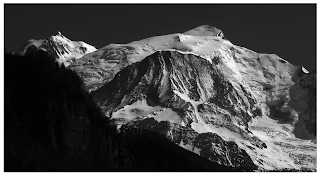 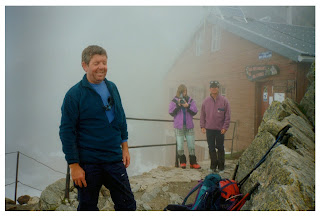 Don Planner brought a large video camera to record the climb, Jane Seaton carried and shot with it on the mountain. Photo credit: Mark Seaton. 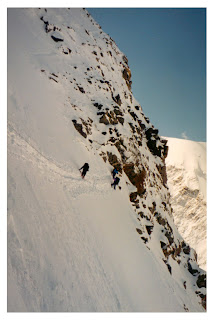 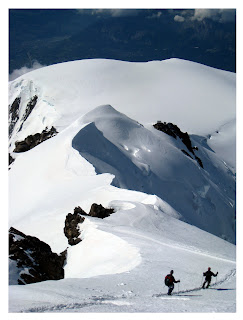 The Bosses Ridge of Mont Blanc. Said Don, "They didn't tell me much about the Bosses Ridge until I got there--then they told me there was a 6,000-ft drop." Photo credit: Mark Seaton.
Posted by Faerthen Felix at 9:49 PM No comments:

In spring of 2011, ski mountaineering in the Alps was horrible and my partner's shoulder was damaged, so I lurked around in Chamonix with the Seatons.

One day, Mark came to me and said he had this video footage from his historic 1996 ascent of Mont Blanc with Don Planner. A TV producer told him at the time that the video was useless since it was shot without a script, so it had never been used. He asked if we could just throw it up on YouTube or something.

Instead, we set up an impromptu camera in Mark & Jane's Chamonix backyard and shot an interview, captured the archival footage, photographed some newspaper clippings and gathered a few photographs. Then, instead of the skiing I had planned, I edited together this documentary about a first blind ascent on the highest peak in western Europe.

I'd just discovered Peach Stealing Monkeys, and their complex, unhinged music seemed a wonderful metaphor for the somewhat insane idea of a determined blind man picking his way up a long, technical and quite dangerous mountaineering route.
Posted by Faerthen Felix at 9:33 PM No comments:

This is the official page for the film, "On Mont Blanc with Don Planner".

The film uses interview and pick-up footage shot in and around Chamonix, France in April, 2011. Still photographs and archival VHS video were shot on Mont Blanc in 1996.

I used a lav mic on a Canon HF-10 camera for the interview, and the same camera for shots of Mont Blanc. Other stills were shot with a Canon Elph. I edited, created the graphics and color-corrected in Final Cut Pro running on an Apple MacBook Pro.
Posted by Faerthen Felix at 9:30 PM No comments: